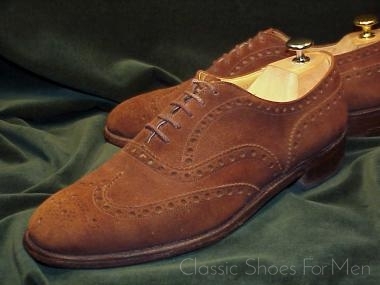 An Interview with Sevan Minasian, the Founder of ClassicShoesForMen

Sven Minasian is a very special gentleman who not only loves donning dress shoes but also collecting dress shoes. I always share a concept that dress shoes are useful art works, and Mr. Minasian’s collection is the cream of the ice. You can visit his website https://classicshoesformen.com/ to check a lot of fantastic shoes such as the masterpiece crafted by Nikolaus Tuczek.

It is a great honour to have this interview with Mr. Minasian.

Could you talk about yourself, your life, your education, your hobby and so on except as a shoe collector?

I have been an avid collector most of my life. Apart from shoes, which I began collecting in the 1960s, while at Columbia Univ. in New York, my birthplace, I have collected fine watches (some of which I will show in the shoe website in the coming weeks), old master prints, and vintage posters (for which I am building another website now). My library of about 3000 antiquarian books, including a large section dedicated to Oriental art, furniture and architecture, is housed in my San Francisco home and is intended to be donated to a university library. I live part time in Germany too, where I have two residences.

There are a lot of gentlemen fancy at dress shoes, but you are the only one who collect so many amazing shoes, how did you start this collection?

I began my interest in shoes as a student, by purchasing a pair of church’s Custom Grade Cape Buck Suede Full Brogue Oxfords at the, then, Church’s shop on Madison Avenue in New York.

This and the Lefcourt’s shop on the same block were two of very few European shoe importers at the time.

Those brogues were the first top quality shoe I ever owned and I have them still, although I have two more pairs of the same shoe acquired over the years and these remain a great favourite.

Living in New York for more than 20 years, and haunting various tailors and shoemakers shops, I acquired a considerable wardrobe. By my 30s, I was traveling to Europe every year, sometimes twice a year, and shopping quite enthusiastically in London and Paris, although I had suits made in Italy and Germany too and occasionally found shoes in those countries too.

On my father’s death, I inherited his wardrobe, and with great good luck, we were the same shoe size. His collection of old Peal and English Lobb bespoke fit me as if made to measure and, of course, they were exactly that, even if not for me.

Hope it is not business secret, how did you get these shoes?

As mentioned, I had already amassed a considerable collection before I even thought of shoes as a business. I am not sure it should be called a business even now; “hobby” might describe it better.

In the last 30 years, it has been a pastime, especially when traveling to a new town, to visit antique shops and vintage clothing stores.

Eventually, after buying shoes repeatedly from the same shops, I have become well enough know to them that, before they even display a shoe of special interest in their shops, they will alert me to it.

This remains my main source today but very close behind in numbers are consignments from other collectors and old clients.

There are currently 2094 pairs on the list, could you tell which three are your favorite, and why? You can also choose those you sold but still impressive.

This is like asking which of your children to you love most. Impossible to answer but generally I am fond of Suede Monks, Tuczek style Gusseted Slipper/Loafers and the Pre-war Spade Sole Oxfords.

Of course these are not the only models I wear. There are shoes for business and shoes for evening, there are All-Weather shoes and high-top boots (Navvy Boots) for visiting the country.

There are exotic leather shoes of great beauty that cannot be denied, including the spectacular Teju Lizard Golf and street shoes by FootJoy.

Many brands come and go, which one do you think is the most pitiful, if it was alive today, shoe lovers would be much happier?

Of the brands that are most missed, the most obvious is Florsheim, the preeminent American shoemaker of the 20th century and the first choice of American businessmen until the company was sold and their American workshops closed. The shoes imported under that name today are good enough but do not equal the old Florsheims.

Less well know is FootJoy, a firm who continue to make sneakers and sneaker-like golf shoes in factories around the world but, with their closing of their American workrooms, the production of the best exotic shoes ever made in America came to an end.

Likewise, Stetson, who’s exotic leather shoes were rightfully considered among the best in the world; another casualty to competition.

Finally, the Mexican bootmaker, Tres Caballos; their “Flying” Jodhpur Boots were matchless, both beautiful and incredibly robust.  Rather than compromise quality, to reduce prices, these makers all simply ended production.

I believe nobody alive sees more bespoke shoes than you, some bespoke shoemakers may be only known to a few people. Which three are your favorite?

If you are asking about lesser know masters in operation today, Oliver Moore in New York stands out with very traditional models and peerless hand work.

Another is Giancarlo Rover in Bologna, who’s traditional models have something extra, something individual about every shoe. His shoes are sculptures with workmanship beyond words.

Finally, Henry Maxwell (Foster & Sons); of course it is wrong to include them in the “less well known” category; they have been in operation since 1750!

Still, I do not think they get the recognition they deserve because of the international focus on marketers like Edward Greens and John Lobs. Maxwell’s bespoke shoes are absolute tip-top quality, and no collector should be without at least one pair, especially of their vintage shoes.

Every pair has its own story, when you acquired a pair, did you try to find out the story behind?

I do look into history whenever possible and you will find many shoes in the website with their history or the history of the owner noted. Of course this is not always possible but great fun when it is, to know in who’s footsteps you are following. History, tradition, heritage, antiquity; these are of paramount interest to the collector.

Of course, over the years, buying and selling shoes, I have met a great many collectors and, gratefully, learned much from them.

As a matter of discretion, I would not name them in publication, only to say that there are gentlemen with whom I have.

What is your plan for your website/business if any? I think you are a treasury for ambitious shoemakers to get inspirations, did you try this cooperation?

Regarding shoemakers: Naturally, over the years I have been in contact with quite a number of shoemaker, many of whom have acquired shoes from me from which to draw inspiration. Others starting businesses have asked advice on various subjects. I have tried to help whenever possible as the common interest is to see the great traditions preserved by young craftsmen entering the field.

As to my plans: You will have noticed that hundreds of shoes that are already sold remain on view in my website. These, or at least some of these, are reference material, intended for inclusion in my book now in preparation on noteworthy shoemakers of the past.

Contemporary shoemakers are well represented by other authors but the comprehensive compendium of historical shoemakers is waiting to be produced.

My final activity in the fine shoe realm will be that book. And as I approach that publication, I will sell off the contents of the website leaving only the most important shoes for reference to other shoe lovers.

If we think back to Shanghai in the 1920s, the blending of Eastern and Western styles, the emergence of Haipai culture, we see that foreign (Western) styles are nothing new to the sophisticated metropolitan area of China. Indeed the remarkable inclusiveness of that time and place rivals any period or place in history, not to mention the charm of the art and style and dress associated with Shanghai then and again in later years.

I think Chinese collectors or simply very well dressed gentlemen will see something of their own history in many of the shoes we love.

Sometimes something new and very beautiful appears when you mix two cultures or simply transplant one inside the other, as if one sees things more clearly set in a new frame.