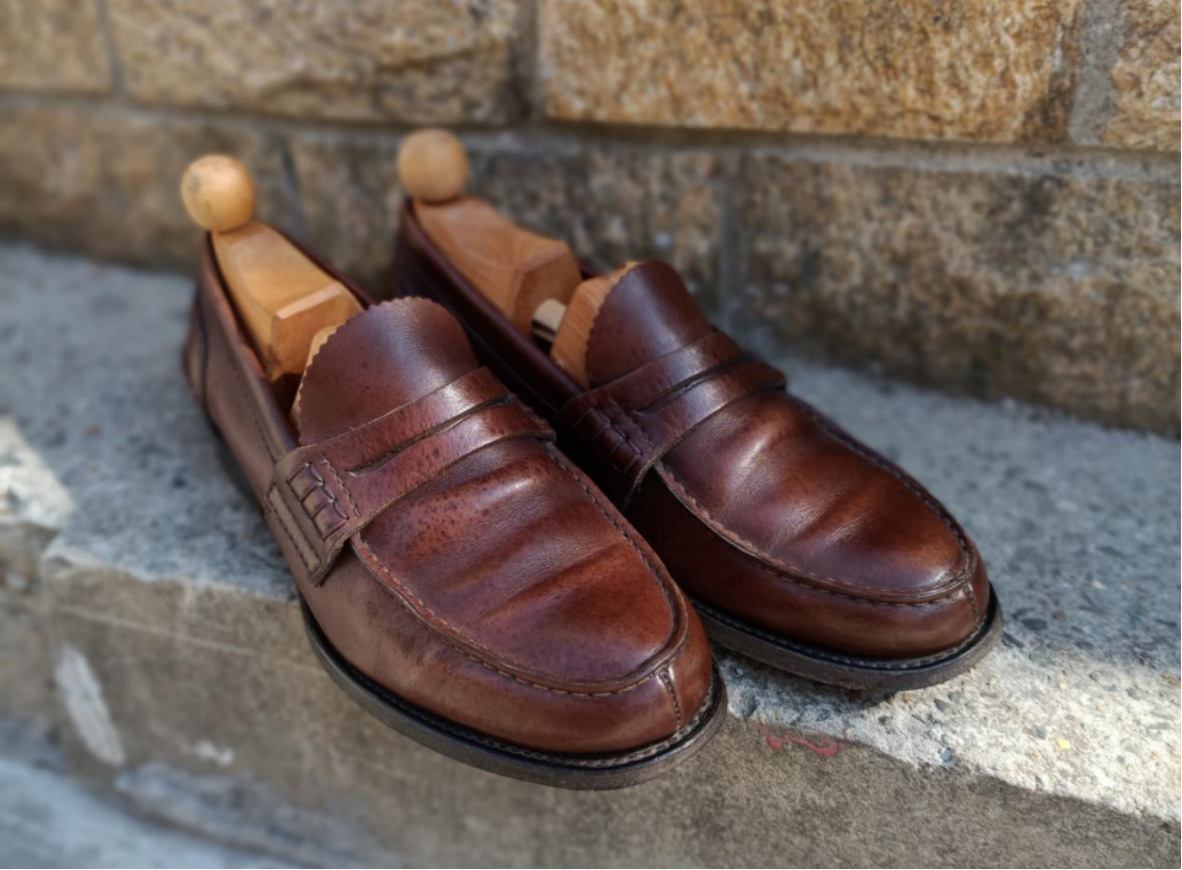 My Shoe Collection, Pembrey from Church’s

Every time when the community talks about Church’s, the words are quite intense.

Every time I glance at some forums especially made of very experienced connoisseur, Church’s are highly praised, but only for its shoes long time ago.

It is so interesting that a same brand can have two extreme comments and both valid. I personally owns several pairs and I can confess they are not bad, but not so good for the price. Of course, I never bought the shit made in Italy named English Shoes.

Let us check this pair, an iconic.

In short, a penny loafer. But when you look closely, the elements are explosive!

Firstly, the J.M.Weston 180 like apron, both the stitches of thin ridge and the split toe.

Then the penny strap salutes to Weejun from G.H.Bass, the ever roughest penny strap.

Heel is also very complicated, the leather is picked up and stitched out a bump, then the counter is a cup. I regard it as the most casual loafer in the world. The cup shape patch is double stitched.

There is an eccentric design on these shoes that the upper is connected in the waist. I look back all the loafers I have ever seen, I don’t see the necessity to connect different pieces. From cost perspective, this may improve the utilization rate of leathers, but the stitching adds labour cost. Aesthetically speaking, it adds more casual feeling into.

To be fair, this model is quite universal that you can find in at least half of shoe brands, I don’t know where it came from and which shoemaker is the first one, and I highly suspect it was an American.

Although Church’s has tons of models, but the lasts are not too many, and the most famous ones are still standing today, such as classic 73 and 100, and the combination, last 173 which is the most popular one recently. Its loafer last is 126, and the only one I met.

I don’t even want to use English to describe Church’s lasts as its roundness is to the fullest that even J.M.Weston 180 and John Lobb Lopez would surrender and call Church’s the king.

Church’s is very famous being the king of bookbinder at an extremely high price. I know there are different levels of bookbinder, and Church’s uses the highest, however, bookbinder is bookbinder.

But when Church’s retreats to its quality shoemaker identity, the calf it uses, Nevada from Haas, is super wonderful. I never saw any disastrous calf leather Church’s.

I think this pair back up the conclusion.

I can recognize a pair of Church’s by looking at the welt promptly, as it is maybe one of the worst in England. It is not bad, it just never improves in so many years. The welt is primitive and rough, but if keeping long enough, it can be a style.

The extrusion of welt is also not good for its price, if welt of Alden is a boat, Church’s is a cruiser.

The feeling of the sole is exactly the same as the welt, primitive, but just that iconic.

Size information of Church’s is also on the waist of leather sole, on the left is a two digital number, on the right is the width, this pair is 60 and F.

I have introduced the size naming system of Church’s. 60 means UK6, and F is its standard width comparable to John Lobb E. According to my so many pairs wearing, I feel its size is smaller than others, so 60F equally 5.5E from John Lobb.

I judged Ray Kwok shoes being to rough on craftsmanship, but comparing to Church’s coarse stitches, Ray Kwok should be priased.

The apron butt seams are also too loose!

Super fine shoes have the heel tightly sits on the heel bottom without a platform around. Look at Church’s, I think Barker and Loake may have done better with only one third or fourth of its price.

I have to applaud for its exhibition of poor craftsmanship tirelessly.

This is a pair of unlined loafer, many tell unlined is more comfortable but I never feel this.

The piping of the opening of shoes are quite round and thick, I feel it is quite good especially for the comfort.

The same pattern was given two model names by Church’s, Pembrey and Tunbridge, in which, Pembrey was calf and Tunbridge Bookbinder. The price is also different, Pembrey for 690 GBP, Tunbridge 650 GBP.

When you think it is very clear, Pembrey released Bookbinder version and charges 690 GBP, what a trick!

To make things worse, there is another model called Willenhall also using bookbinder, the difference is it is storm welted.

I can and cannot understand why Americans think so highly of Church’s. As the first English brand entering US market, the toe shape fit well into the heart of Americans. But when Alden and Allen Edmonds both make more good looking shoes than Church’s, why the love never fades?