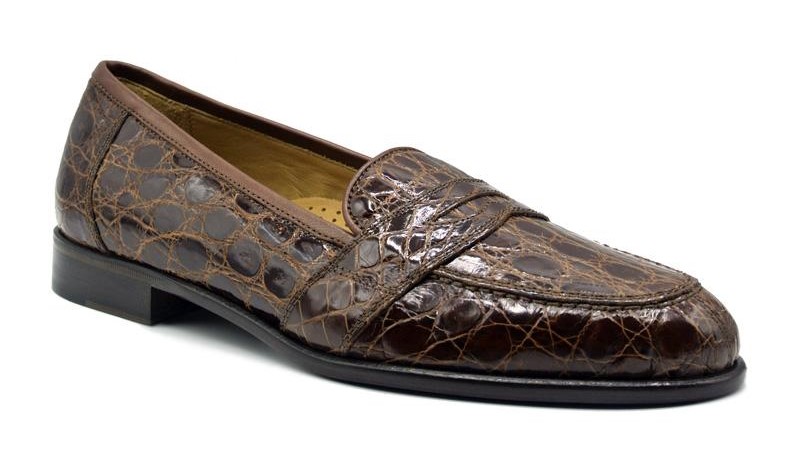 If we talk about shoe brand which is very keen of exotic leather, which one comes into your mind first? To me, it is the French top luxury brand Zilli which not only make exotic leather shoes, but leather jacket and overcoat. Check this one.

Then why the title is Zelli? Is Zelli a counterfeit brand trying to manipulate the reputation of Zilli?

Not so. Although Zelli does not have heritage and only founded in mid 90s, but its focus was and is always on exotic leather shoes since the beginning.

Exotic leathers have a lot of choices, such as Ostrich, Lizard, Shark skin, elephant leather, but the ever classic would always be crocodile leather.

If you glance all the shoes made by Zelli, you have the feeling that they are just ordinary Italian shoes, not finely made, but not badly made as well. And Zelli is not a fan of eye catchy designs which I appreciate.

Among so many models, loafer is doubtlessly the mainstay, which is quite reasonable as an Italian brand. Loafer is further divided into two categories, not penny loafer or tassel loafer in your mind, but normal loafer and low vamp loafer. Low vamp loafer? What is that? It is the loafer with larger opening so more instep is shown. The loafer would be more slipper alike and feminine.

I find so much joy in its crocodile leather loafers as it reminds me about the golden age of American shoemaking.

In the 1930s to 1940s, the wealthy Americans loved crocodile shoes so much, and Footjoy was the king of this field. And the iconic shoes were just like the above one.

How did I find this brand? It is about NIKE. What? Nike?

Cole Haan is not really good shoes today, but in its heyday, man, they were made by Edward Green!

Not so fast to blame Nike, because even before the acquisition, Cole Haan had moved downward to make shoes in Italy and released a collection name Bragano.

And this Bragano was actually made by Zelli. That is why I feel low vamp loafer from it is so antique and luxury feeling.

Price is around 1300 USD, I cannot verdict it is cheap or too costly, but the feeling justifies the price.